Drafts 4 is now available on the App Store. Drafts 4 is an all new Universal (iPhone and iPad) app and requires iOS 8.

Drafts is a quick capture note taking app for iPhone and iPad. Drafts launches ready to type, making it quick and easy to capture thoughts, status updates or anything else on the go. After capture, Drafts provides a powerful array of highly customizable “actions” to send text to email, messages, events, Dropbox, Evernote, social media, other apps – making it an indispensible tool for anyone trying to be productive on iOS.

Originally launched in April, 2012, Drafts has been one of the most consistently developed and popular apps in the App Store productivity category and has garnered top awards, including Macworld’s coveted Eddy Award in 2013 and selection for the Lifehacker pack of essential iPhone and iPad apps.

More about Drafts on the product page 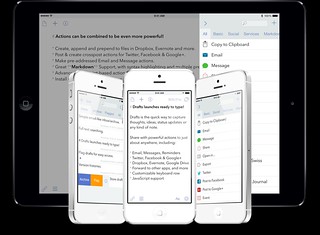 Drafts 4 is an all new, Universal (iPhone & iPad) version of Drafts, rewritten from the ground up to take advantage of all the latest Apple devices and iOS 8.

Drafts 4 scales from simple, fast text capture and sharing – up to a powerful toolkit for automation and text manipulation, making it an essential part of any iOS productivity toolkit.

Read the full release notes at our help center!

Drafts 4 is an all new app and can co-exist with installations of previous versions of Drafts. Installing Drafts 4 will not replace your existing installation. It has a new sync system (based on iCloud’s CloudKit technology) and significant changes to the amount and type of data stored by Drafts 4 prevent it from sharing data with previous versions directly. There is a simple one-time migration path if you wish to move drafts and/or actions from the old version to the new version. This migration can be done at any time – there is no need to do it before you start using the new version.

Along with Drafts 4, we are also launching an all new Drafts Action Directory. Drafts customers can share their own advanced actions and keyboard extensions created in Drafts to the directory, building an incredible repository of iOS workflow integration knowledge. The directory also has a commenting system and app directory for discussion about app integration.

Thank you for your continued support of Drafts! Please contact us with issues, feedback and questions via our help center. We appreciate your patience in-advance as we work through any issues that may come up with the initial release. It is difficult to fully test an app as open-ended as Drafts, but we are commited to improving it.